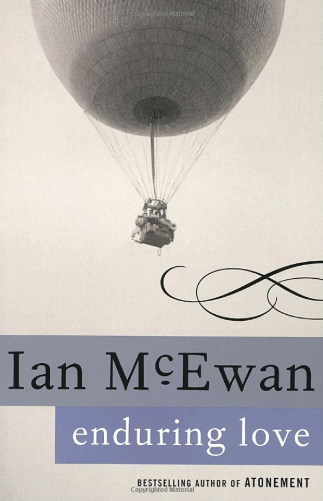 In a 2009 article entitled “The Rise of the Neuronovel,” the critic Marco Roth claimed that, in Anglo-American fiction, the workings of the mind had been replaced by the mechanics of the brain, and he dated the shift to the English writer Ian McEwan’s 1997 Enduring Love. In this novel, a young man with De Clérambault syndrome, a condition also known as erotomania, in which patients believe someone is in love with them, stalks a science journalist. The novel’s appendix consists of a clinical case history and a scientific bibliography.

Joe planned a postcard-perfect afternoon in the English countryside to celebrate his lover's return after 6 weeks in the States. The perfect day turns to nightmare however, when they are involved in freak ballooning accident in which a boy is saved but a man is killed. In itself, the accident would change the couple and the survivors' lives, filling them with an uneasy combination of shame, happiness, and endless self-reproach. But fate has far more unpleasant things in store for Joe. Meeting the eye of fellow rescuer Jed Parry, for example, turns out to be a very bad move. For Jed is instantly obsessed, making the first of many calls to Joe and Clarissa's London flat that same night. Soon he's openly shadowing Joe and writing him endless letters. (One insane epistle begins, "I feel happiness running through me like an electrical current. I close my eyes and see you as you were last night in the rain, across the road from me, with the unspoken love between us as strong as steel cable.") Worst of all, Jed's version of love comes to seem a distortion of Joe's feelings for Clarissa.

Apart from the incessant stalking, it is the conditionals--the contingencies--that most frustrate Joe, a scientific journalist. If only he and Clarissa had gone straight home from the airport... If only the wind hadn't picked up... If only he had saved Jed's 29 messages in a single day... Ian McEwan has long been a poet of the arbitrary nightmare, his characters ineluctably swept up in others' fantasies, skidding into deepening violence, and--worst of all--becoming strangers to those who love them. Even his prose itself is a masterful and methodical exercise in de-familiarisation. But Enduring Love and its underrated predecessor, Black Dogs, are also meditations on knowledge and perception as well as brilliant manipulations of our own expectations. By the novel's end, you will be surprisingly unafraid of hot-air balloons, but you won't be too keen on looking a stranger in the eye.

The book was adapted into a movie in 2004. Watch the trailer below: